Iron Council is the capital of the Dwarven empire, hidden in the mountains in the northeast of Maj'Eyal. None but dwarves know the secret of its location.

The dwarven economy is internally fueled by transactions in the following stores:

Store inventories are generated for level 8 at character creation, level 25 after The Master, and level 40 after the Charred Scar.

There are no speaking NPCs in Iron Council (your fellow dwarves are taciturn by nature), but there are exits to Escape from Reknor and The Deep Bellow within the city (the former in the northeast, and the latter in the northwest). The exit to the world map is in the southwest. 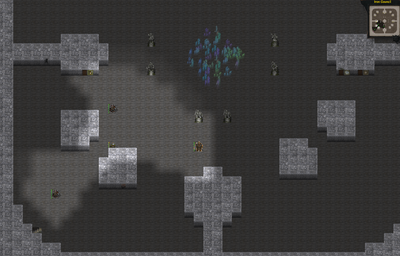