From Tales of Maj'Eyal
(Redirected from Godfeaster)
Jump to: navigation, search

The Godfeaster is zone that can be accessed through a world map encounter, which can occur randomly after the player reaches level 30. When it is triggered, the player is presented with the following dialogue choice:

The ground suddenly shakes under your feet and a giant worm appears to gobble you up!
You could try to escape using the Rod of Recall or accept your fate.

If the player chooses to accept their fate, they will enter the dungeon. The Rod of Recall will not be usable inside this zone, and one must defeat the guardian in order to leave. Similar to the Unknown Tunnels and Dark Crypt encounter, the player will only have one chance to enter this dungeon when it is triggered.

The single floor map consists of a long winding path following the Godfeaster's spine from west to east. Gastric waves will periodically flood this path, but the player can dodge into alcoves along the side in order to avoid them. Each wave will arrive 5 turns after a warning. It is helpful to keep an eye on the minimap here, as it will indicate when the player is standing on a safe square inside an alcove.

When the player has traveled pass three-quarters the width of the map, they will encounter Malyu, a friendly adventurer who is also trapped inside the beast. Malyu will join the player's party and follow them around. Adjusting her leash distance can help prevent her from running too far away from the player.

The zone guardian is the The Divine Writhing Mass. Due to its very high resistance from the gastric wave buff, it will be helpful to gear up with penetration items before fighting this boss. After the guardian is defeated, a portal will appear at the end of the path and allow the player to return outside. The gastric waves will also stop, allowing the player to backtrack in safety.

There is no guaranteed unique reward for completing this dungeon, but the loot here is at least of fairly high material level. Upon exiting the dungeon, if Malyu survived, a humorous conversation will occur, parodying the rewards dialog of escort quests. Regardless of the choice made in the conversation, the player will receive the achievement Is that how it feels to be an escort quest?! 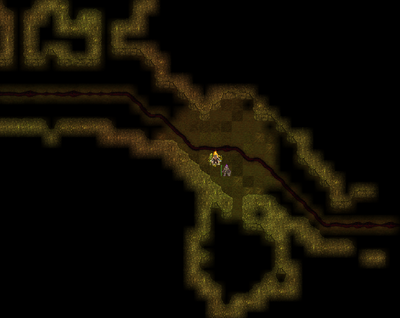