Sher'Tul Fortress is the name of a quest, which involves the discovery and claiming of Yiilkgur, a Sher'Tul fortress.

The Sher'tul Fortress is initially found at the bottom of the Lake of Nur, and later can be accessed from a portal southeast of Derth, in a corridor flanked on one side by forests and on the other side by mountains.

When you first enter the Sher'tul Fortress, you are in a small cul-de-sac and must defeat the Weirdling Beast, a difficult boss with healing, damaging spells, decent melee and the ability to turn off your sustains. After the Weirdling Beast dies, the locked door behind it opens and the stairs up to Lake Nur 3 disappear. Because the Sher'tul Fortress has no material limits, it is possible (but unlikely) for the Beast to drop very powerful equipment such as voratun weapons or drakeskin armor.

The rest of the fortress is divided into 5 main parts. The entrance/exit portals are just past the door. Beyond that is the main room which contains the Control Orb, which can be used to take possession of the fortress, and the Butler who can tell you about the fortress. To the south is the storage room; items dropped in this area are automatically sorted by type (items dropped anywhere in the zone will not decay.) To the north is the Training Facility (initially locked) and the Library of Lost Mysteries, which may be accessed to read all the lore that any character you have played has ever come across. Further east is the Farportal room, which is initially locked.

Gaining control of the fortress and talking to the butler lets you have the Transmogrification Chest, or, if you have already unlocked the Chest for starting characters, hooks yours up to the Fortress's systems. From then on, any item you transmogrify will gain you a certain amount of fortress energy.

If you are a donator, then you may also use the items vault which is attached to the storage chamber. This allows you to transfer some items between your different saved games.

If you bought the game from an Indie Royale bundle (and activated the addon that was distributed with that version), then each character that reaches the fortress can ask the butler for one Royal Item out of a selection of six.

Once you have 15 energy, you will be asked to return to the Fortress, to pay 15 energy to upgrade your Rod of Recall to recall you to the Fortress instead of the worldmap. When exiting the Fortress, if you used the Rod to get in, you will be returned to the world map just outside the zone you recalled from. This is the only way you can access your stored items in the Fortress while you are in the Far East (until you have built the portals to allow transportation between the continents).

Once you have 45 energy, you will be asked to return to the Fortress, and the door to the Farportal room will be unlocked (for no energy cost). This room will contain a horror with talents from a random class, and the Exploratory Farportal. You can pay 30 energy to enter the Farportal, which takes you to a randomly generated zone with random enemies and a random (very dangerous) boss at the end. You may enter the Farportal as many times as you like, so long as you have enough energy. If you use the Rod of Recall to escape the randomly generated zone (instead of using the exit portal), there is a 90% chance that the Exploratory Farportal will break permanently.

You can pay 50 energy to unlock the door to the Training Facility room. This room allows you to spawn training dummies on which you can test your combat abilities.

You can pay 60 energy to alter the butler's appearance.

Undead characters may spend 10 energy to make the effect of the Cloak of Deception permanent, freeing their cloak slot. (If the character was not wearing the cloak at the time, they will need to put on and take off the cloak to apply the permanent effect.)

Alchemists (or other characters with Extract Gems) may spend 25 energy to upgrade the Transmogrification Chest to automatically extract gems and then transmogrify the gems, substantially increasing the profits/energy gained without having to manually extract gems every level change. 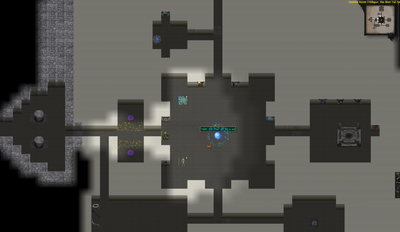