The Gates of Morning is the headquarter of the Sunwall, a faction of humans and elves in the Far East. It is the home of High Sun Paladin Aeryn, Zemekkys and Limmir. In addition, Melnela in the northern section of town will initiate the Eight legs of wonder quest in Ardhungol, the spider caves.

Reaching the Gates of Morning and speaking with Aeryn at the entrance allows unlocking of Sun Paladins. Once the player has been allowed entry, Aeryn will teleport to the far eastern side of town. Speaking with her again initiates The many Prides of the Orcs quest, and she teaches you the talent Relentless Pursuit. She will also suggest speaking with Zemekkys, whether you've already done so or not.

Zemekkys will initiate the quest to return to Maj'Eyal by revealing the location of the Vor Armoury, and then Briagh's Lair.

Finding the Ancient Tome titled 'Gems and their uses' (randomly generated) allows you to speak with Limmir to initiate the Lost Knowledge quest in the Valley of the Moon.

The Gates of Morning contains the following shops:

The difference in material ranges is due to the inscription stores using the player level to determine the material range, and the equipment stores not doing so. But this difference does not matter, due to inscriptions not having a material tier. Needs verification 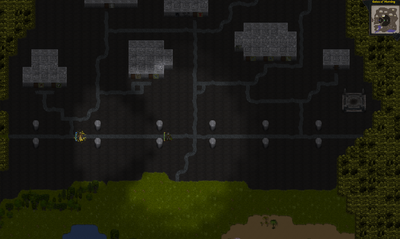 The Gates of Morning
Retrieved from "http://te4.org/w/index.php?title=Gates_of_Morning&oldid=17906"
Categories: